Next to the ancient church of San Bartolomeo di Caselle of the 13th century, two apartments located in the residential area of the building offer a perfect place for those who want to have a holiday dedicated to relax, to excursions in the area and to those who want to switch off from their busy daily life. Generally our clients are managers, intellectuals, doctors, people looking for a place of peace and well-being, a place to rest and regenerate body and mind.
The apartments have been renovated paying great attention to every detail, respecting the ancient architecture and the details that make this structure a unique place. Wrapped in an indescribable landscape on a small promontory that isolates it from the surrounding area and elevates it by broadening its horizons.

The two apartments are very similar, furnished with elements designed by the greatest international designers and with some antique pieces belonging to the collection of the owner’s family. There is no swimming pool, a deliberate choice due to the characterics of the place. A garden surrounds the property allowing you to enjoy the view and the beautiful sunsets over Val d’Orcia.
In one apartment there are two double bedrooms, in the second one double and one twin, double bathrooms equipped with the latest hydro-massage models, Turkish bath and chromotherapy showers. The kitchens are equipped with all the necessary appliances and crockery (Alpe Inox, Miele, Villeroy & Roch).
Satellite TV in every room, free Wi-Fi and air conditioning.
Daily cleaning. 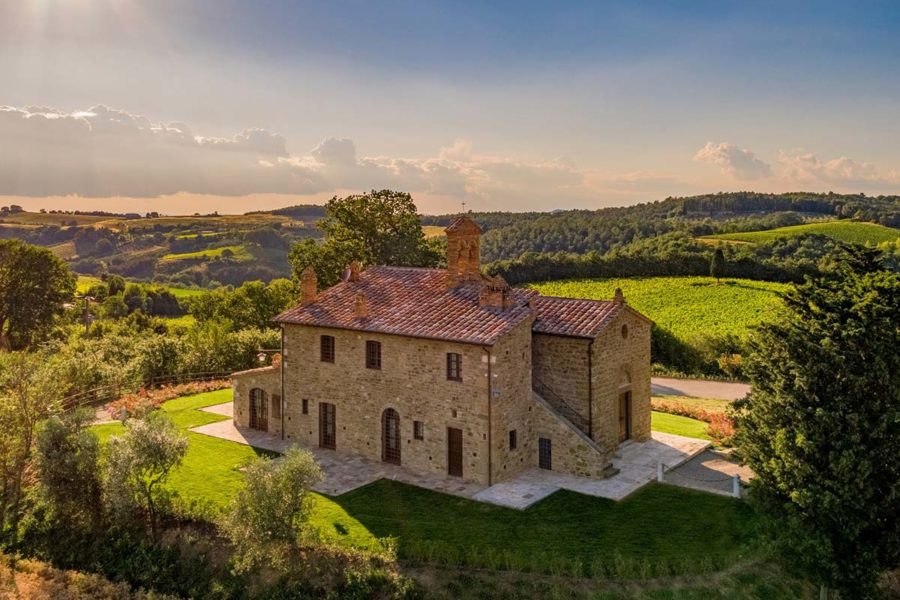 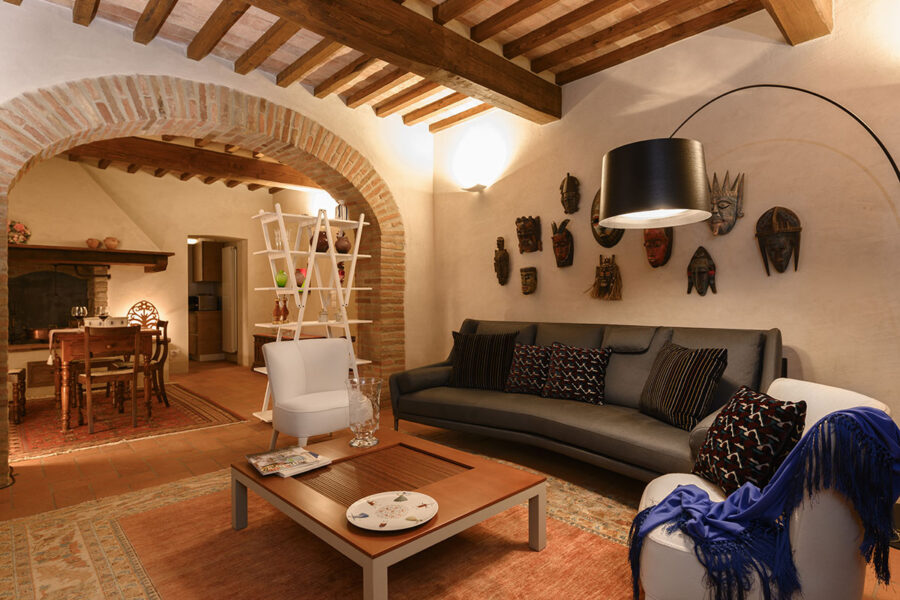 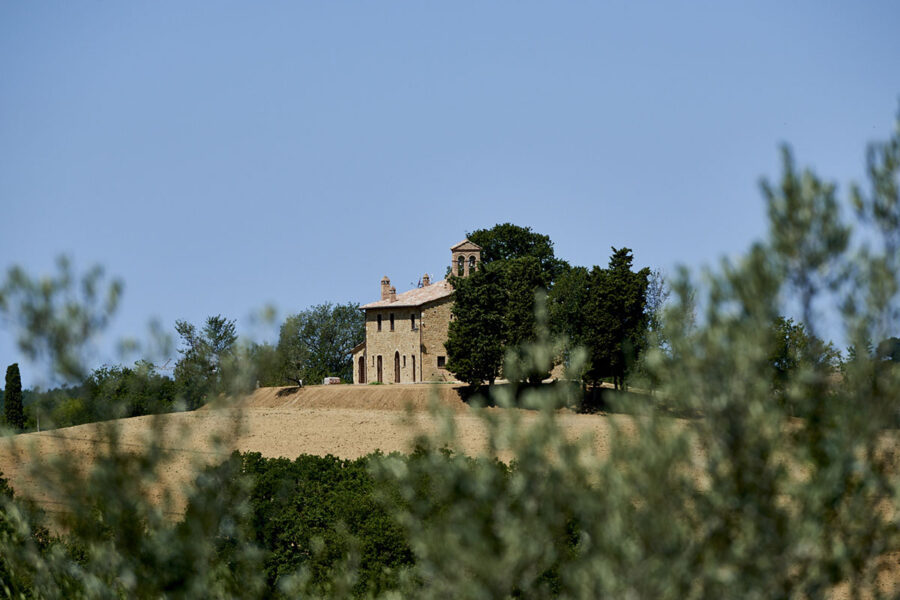 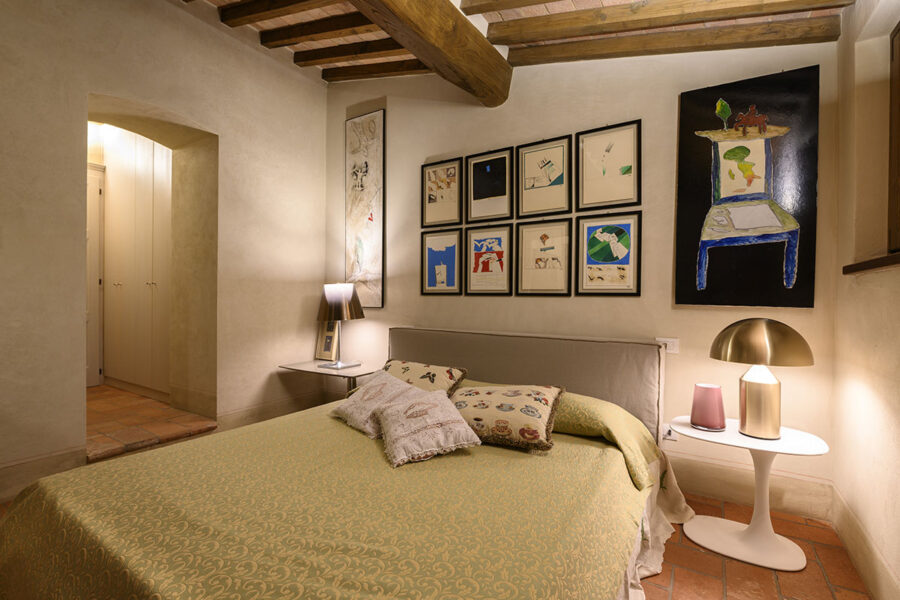 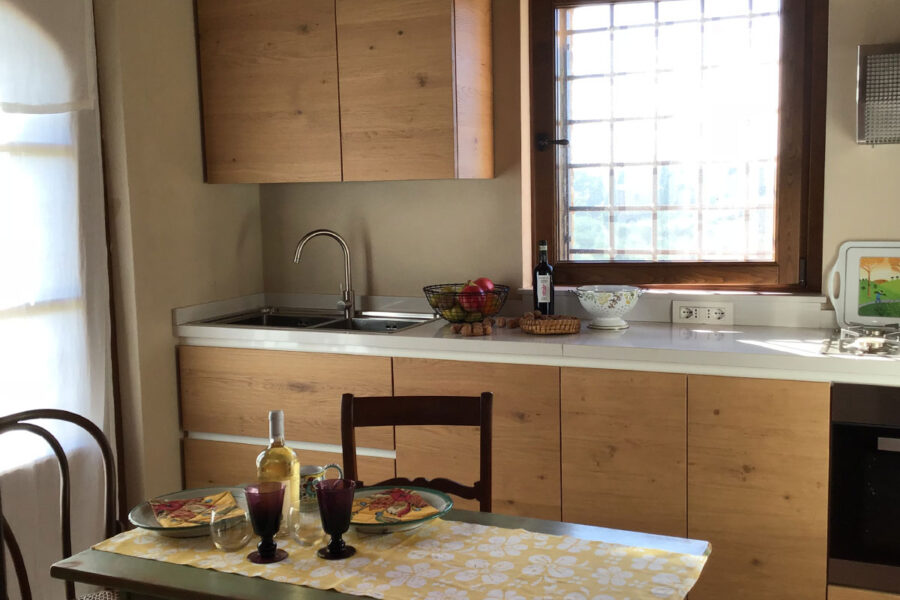 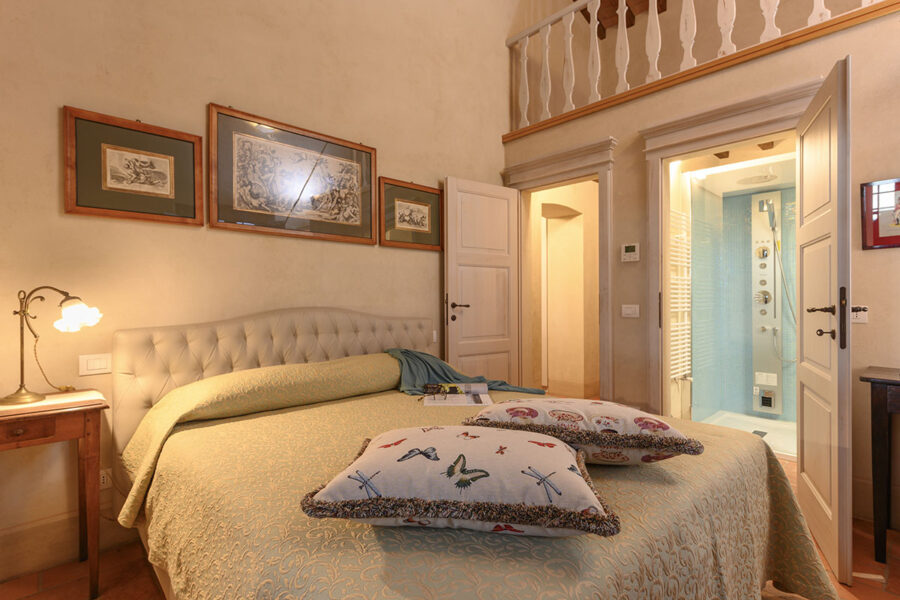 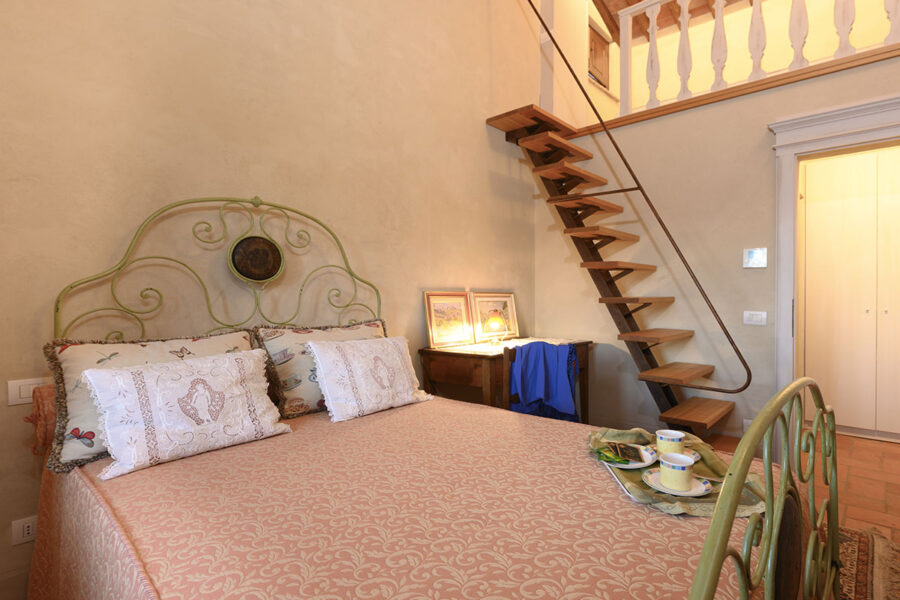 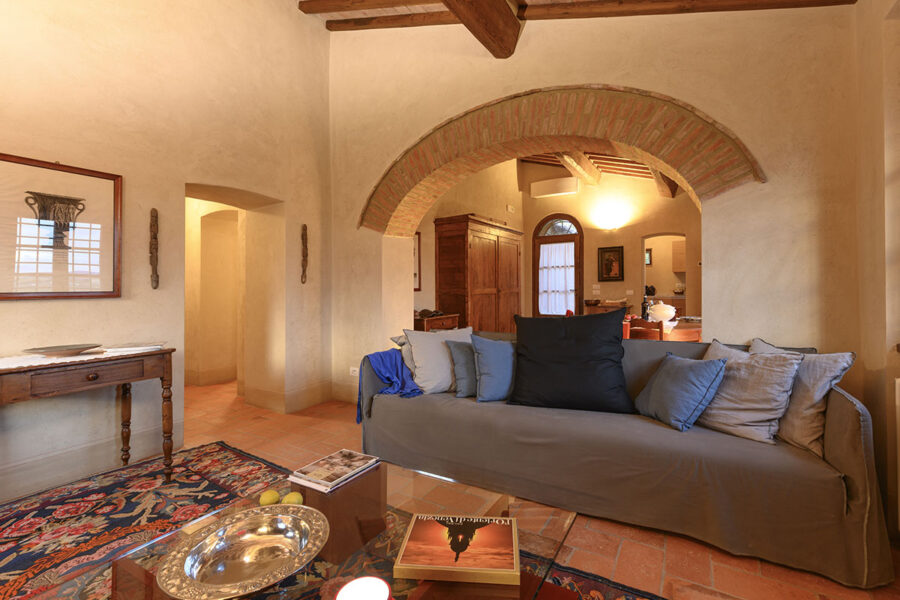 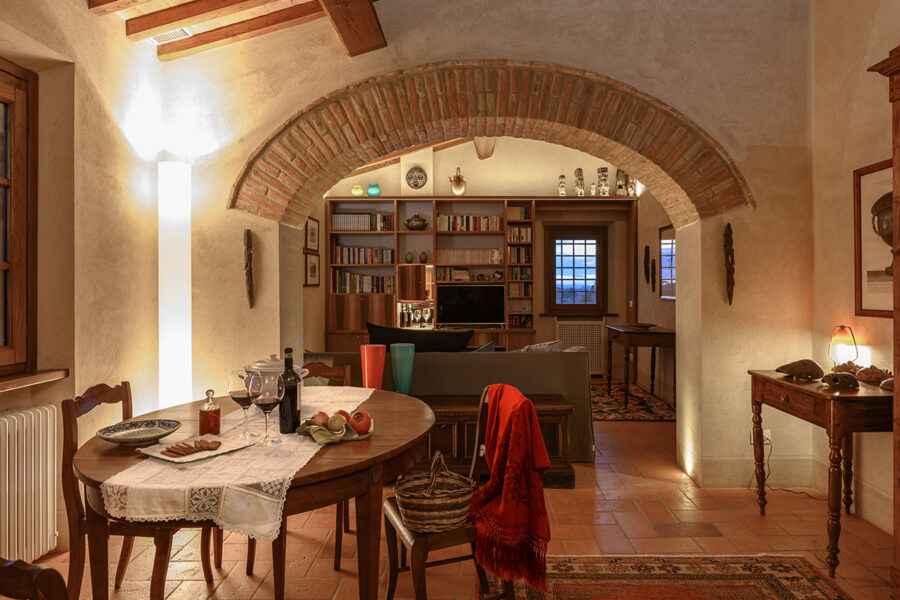 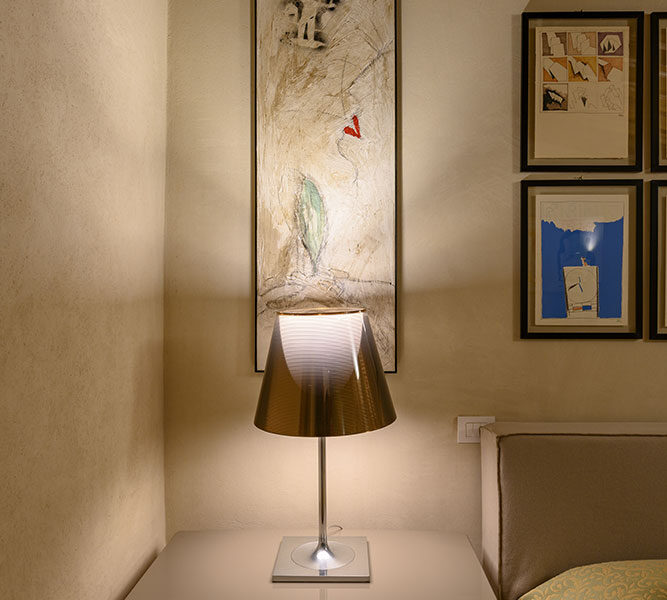 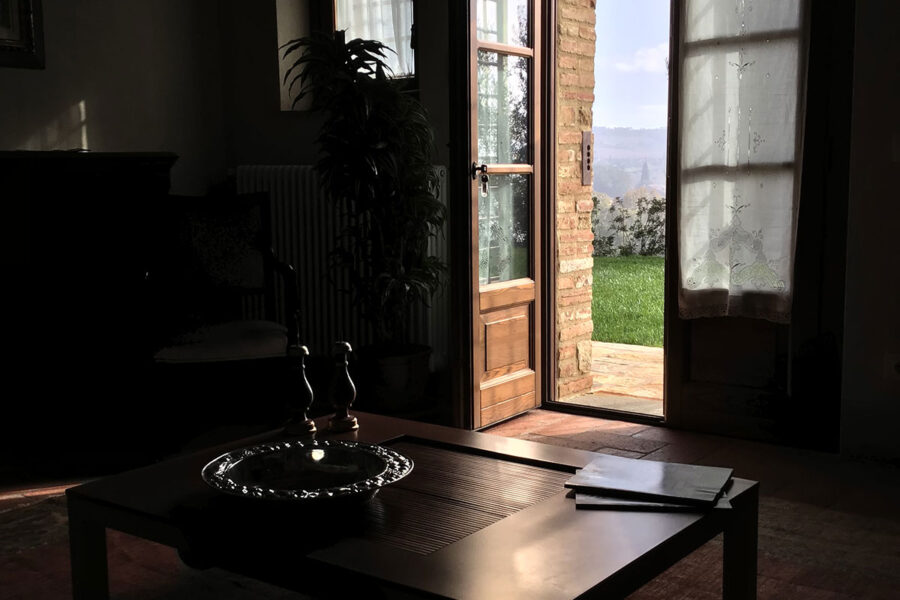 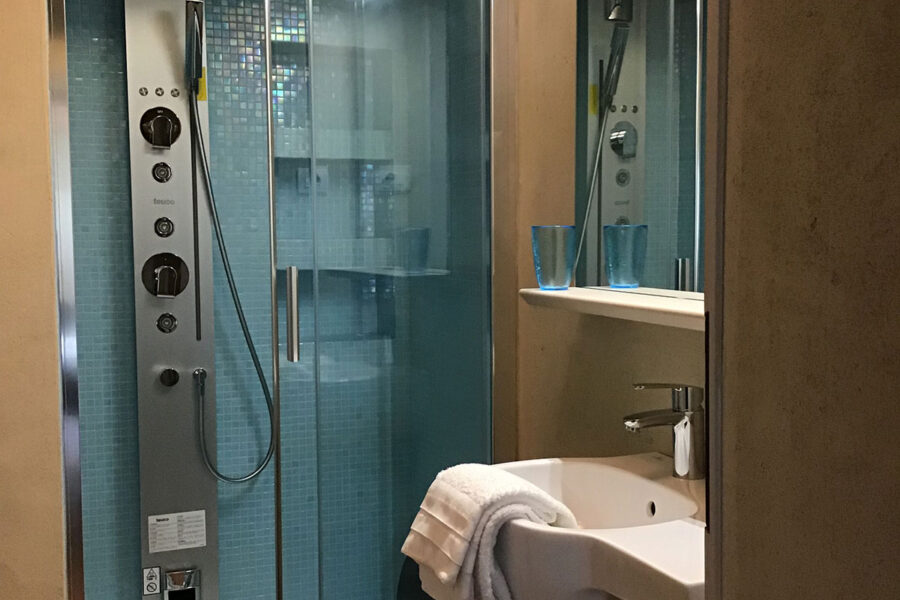 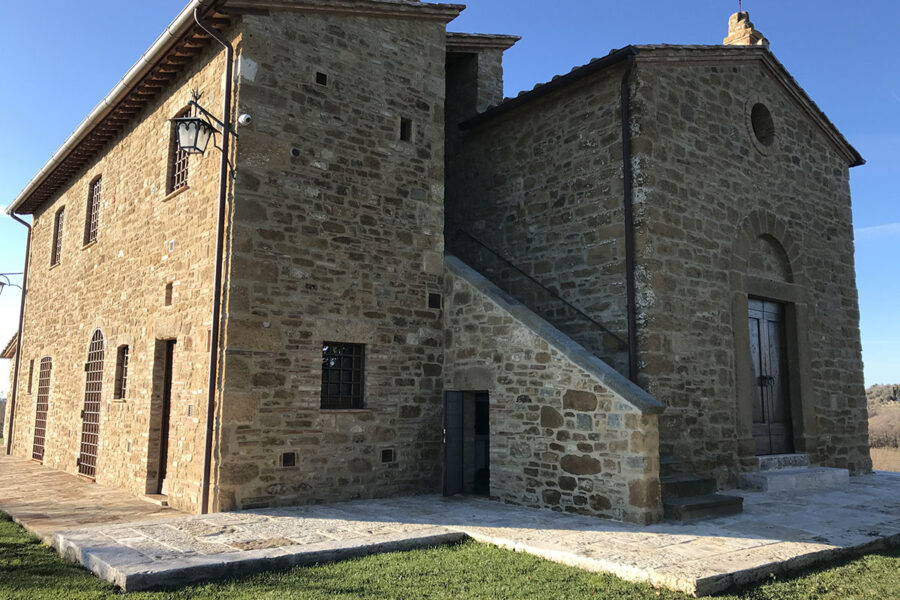 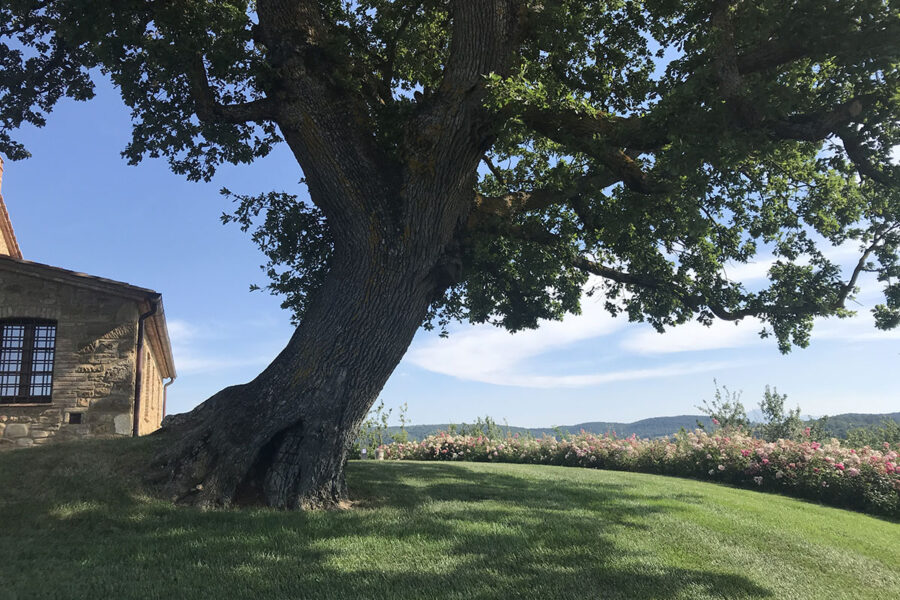 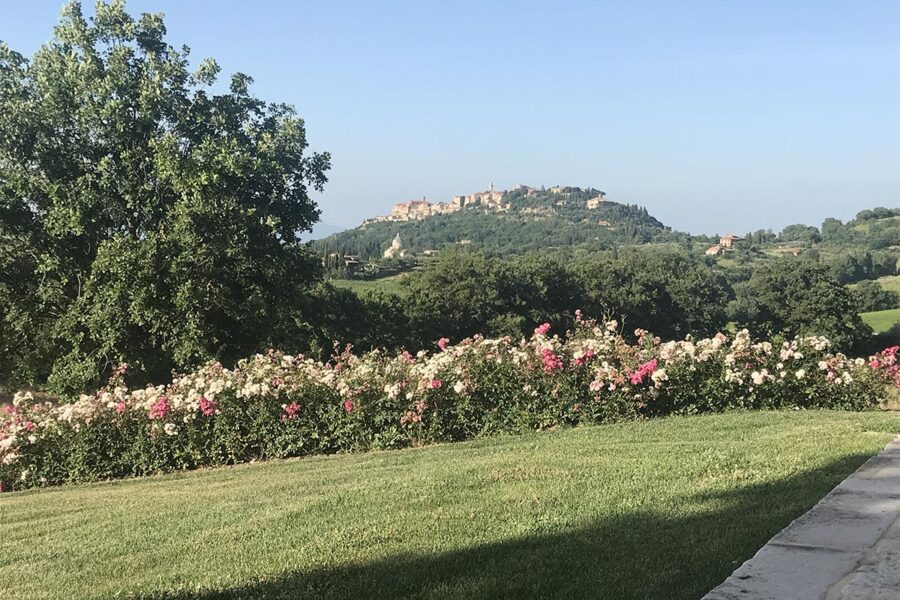 On request we can offer:

We can welcome only one group in our structure.
It is not suitable for pets.

Our guests have free entrance in the Villa Trecci Park during the opening hours and it is also possible to book concerts and shows that are scheduled for the season.

The Church is open and available for all those who wish to celebrate any private religious ceremony, such as weddings and baptisms.

In 2014, the Interdiocesan Institute for the Support of the Clergy of the Diocese of Chiusi Pienza and Montepulciano sold the Church of San Bartolomeo in Caselle. The Church had been abandoned for a long period of time that began in the middle of the last century. This small Church had lost its importance because it was not able anymore to meet the needs of the cult. Years ago it had lost its function as a Parish, a role which passed to the nearby Temple of San Biagio.

If we go back in time, to reconstruct its history over the centuries, we must start from 1236, the year when the church was founded, we realize that although it was a Parish of great importance for its territorial extension and the number of parishioners, because of its distant position, at a time when people had to go on foot to reach it, it was not a coveted place by the parish priests who went there only when they were obliged.

An explicit series of documents, dating back to pastoral visits by the various bishops sent from Rome charged with monitoring the state of the churches in the area, describe the deterioration in which our little church was often found and ordered the careless parish priests to maintain and restore the Parish.

However, like the phoenix, the church of San Bartolomeo has always risen from the ashes, because its importance on the territory was fundamental. It was one of the first churches in Montepulciano and, as evidenced by a document preserved at the Diocesan Archive of Montepulciano, in 1749 it had under its own spiritual protection, one hundred and thirty families and six hundred parishioners.

The church, which is under the safeguard of the Ministry of Cultural Heritage and Activities and Tourism, in Florence on January 22nd 2014, finally obtains from the government the necessary safeguard measures for its preservation.

When we bought it, the church was already collapsing, and I think it would have no longer resisted.

The reconstruction highlighted several details which had become illegible due to the state of the building. The restoration work made it possible to discover an early sixteenth century bell tower replaced during the first half of the century by a belfry similar to the actual one.

Such a discovery, among the remains of the walls, is confirmed by the canvas exhibited in the Church with a full portray of St. Bartholomew while in the background appears the sacred building with the bell tower still existing.

The church has been restored over the years and when the canonica was added to the building in the 17th century, it took on its original size both in length and width and the north wall was rebuilt one hundred and sixty centimeters back inwards.

This is the reason why decided to correct the plan of the plan of the Church which, having been reduced in height, had become square. The narrowing of the perimeter wall to the north restores the rectangular plan of the building.

Now that the reconstruction is over, we are happy to give back this Sacred Place to the cult, to open its doors to those who wish to visit it with due respect.

We are so happy to give back the Church of San Bartolomeo di Caselle to the Faith of the people who live here just as it was at the time of their grandparents, the Church where the traditions of their families are born, where their ancestors rest.
We have brought this Church back to its people as a sign of gratefulness for welcoming us in Montepulciano.

The Church is open and available for all those who wish to celebrate any private religious ceremony, such as weddings and baptisms. 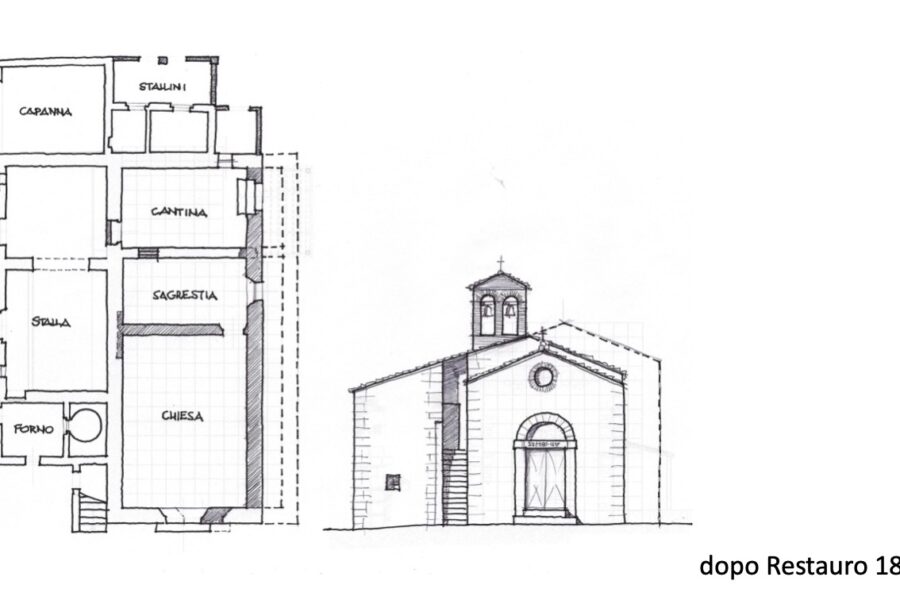 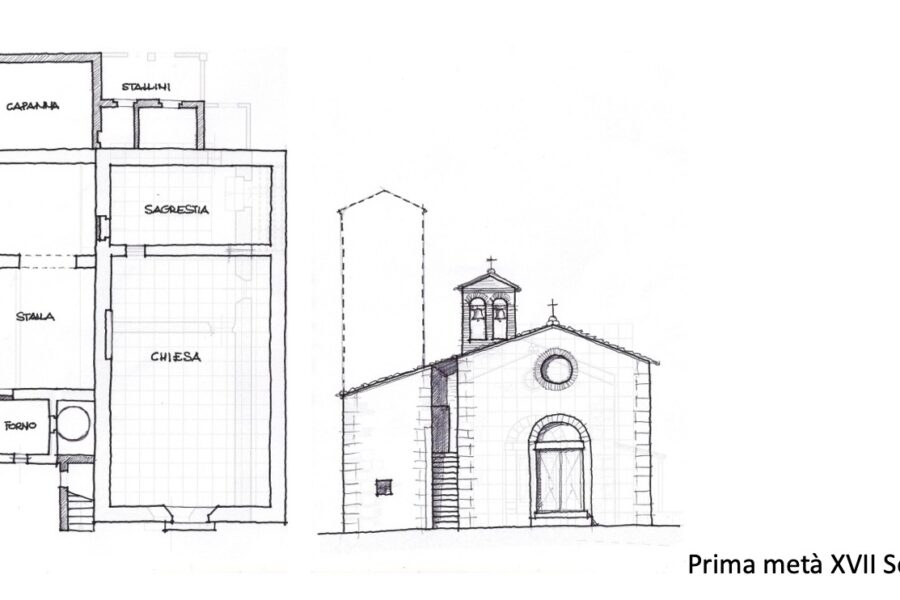 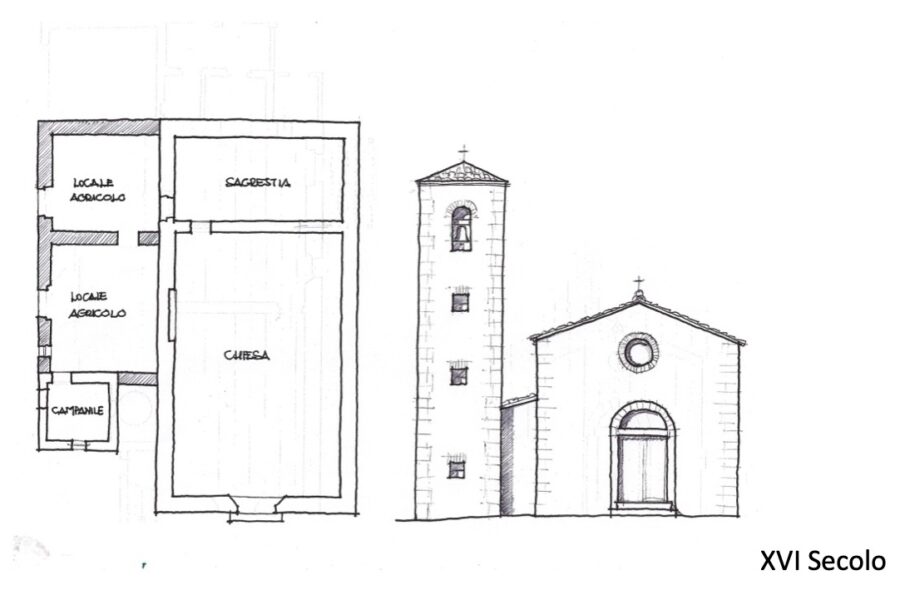 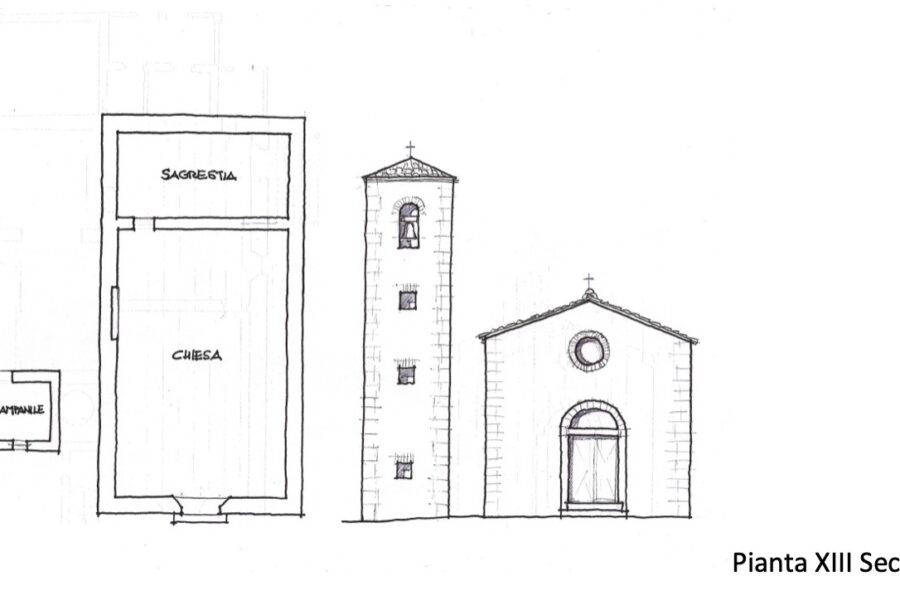 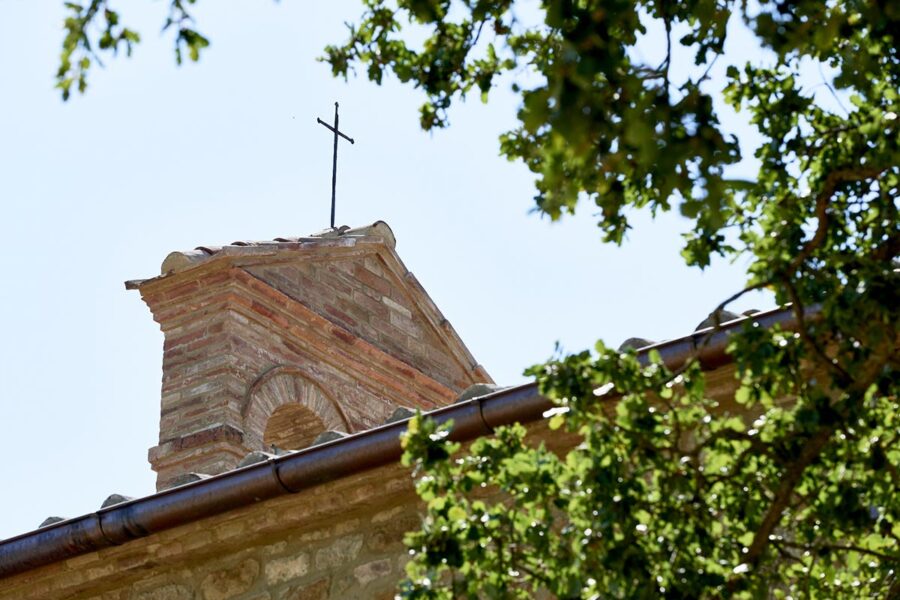 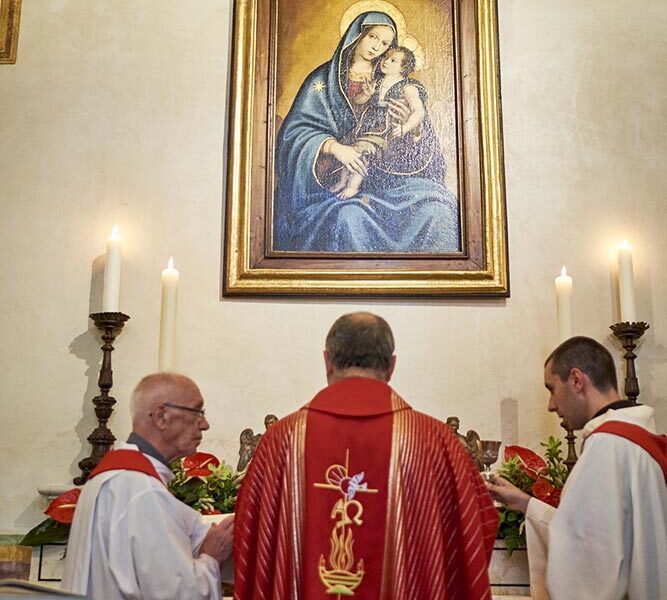 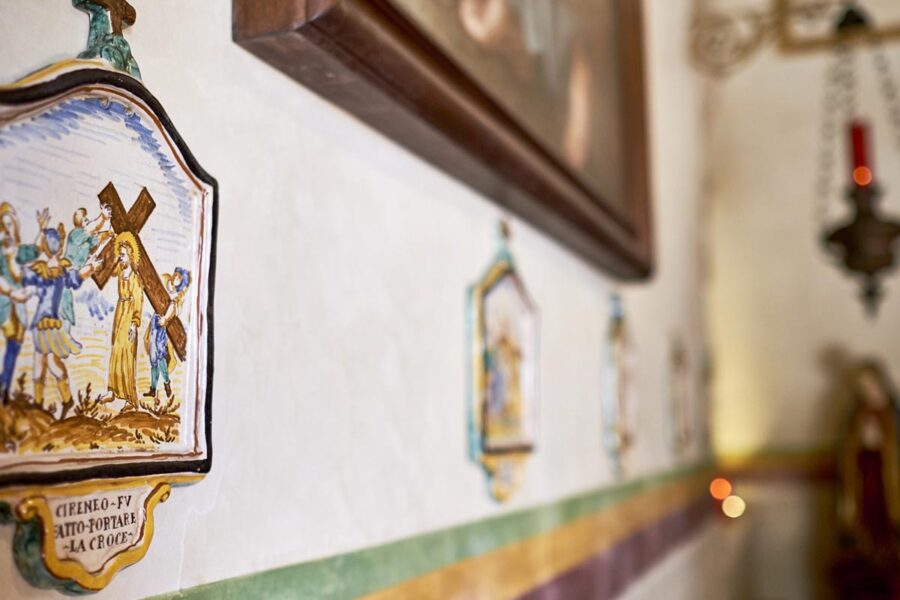 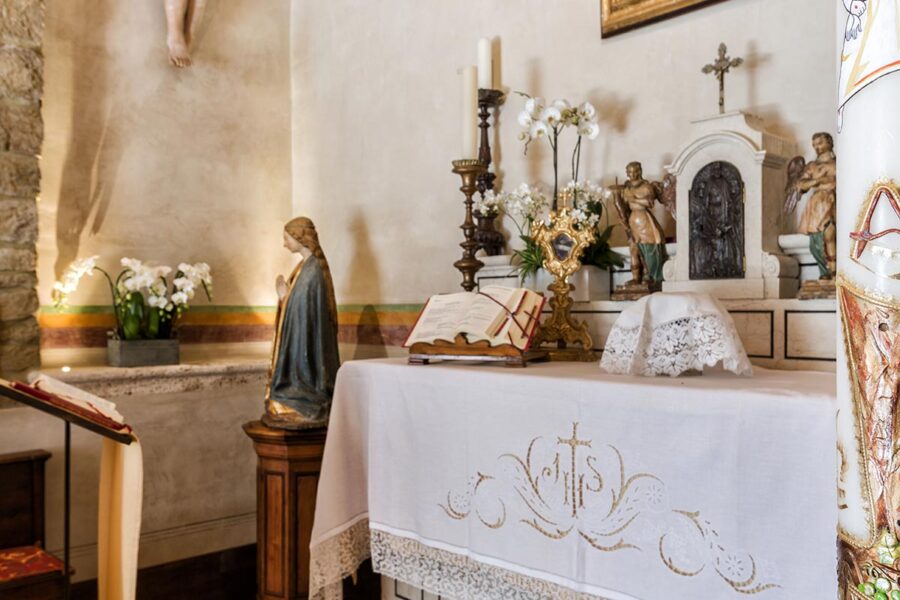 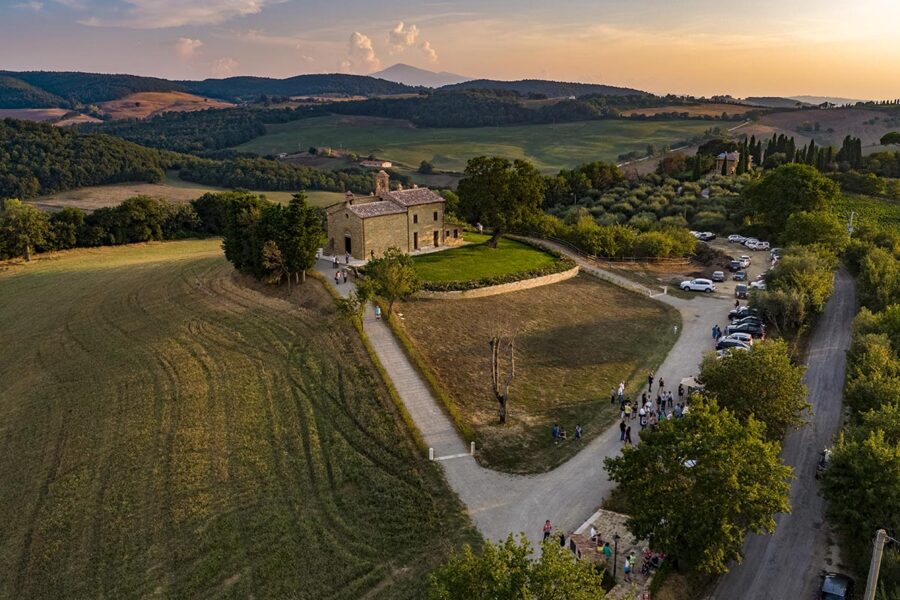 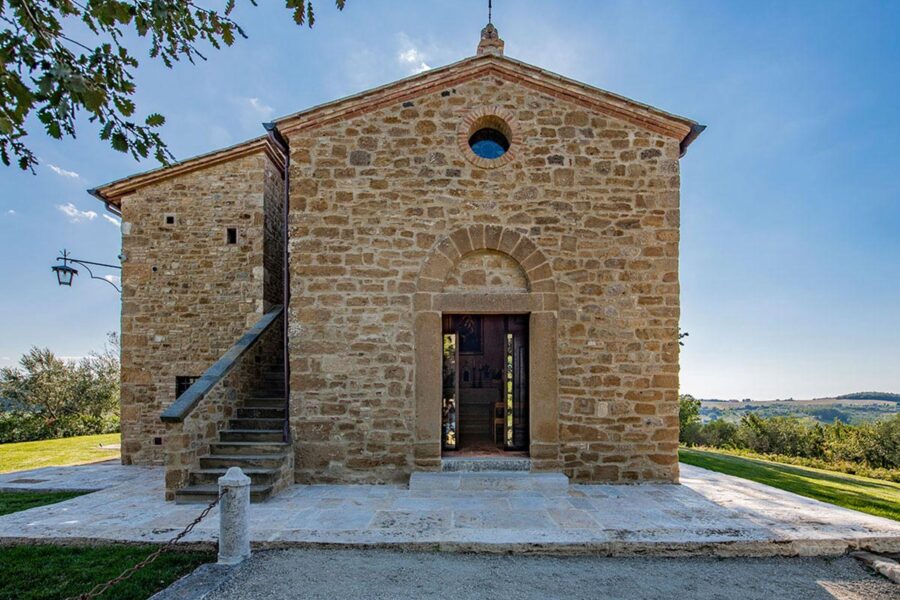 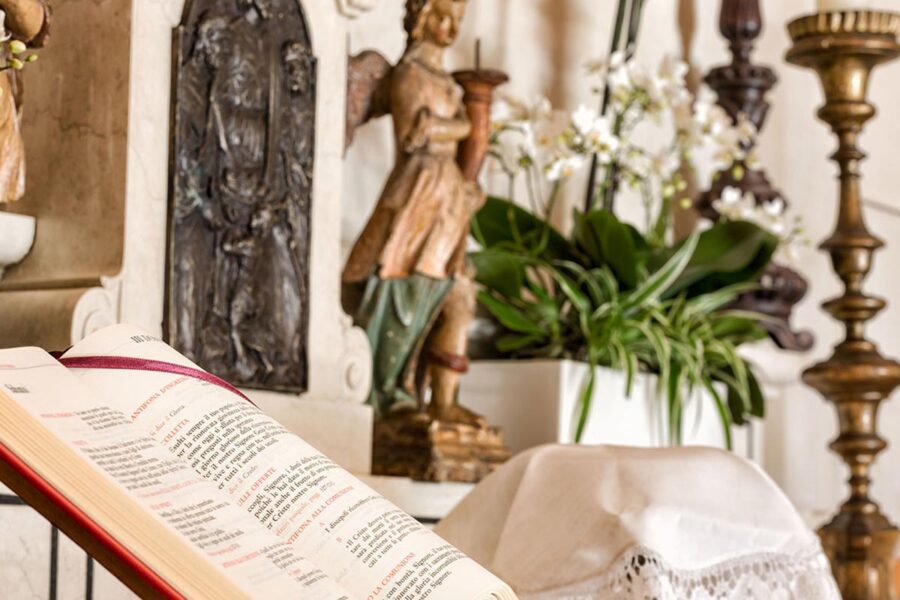 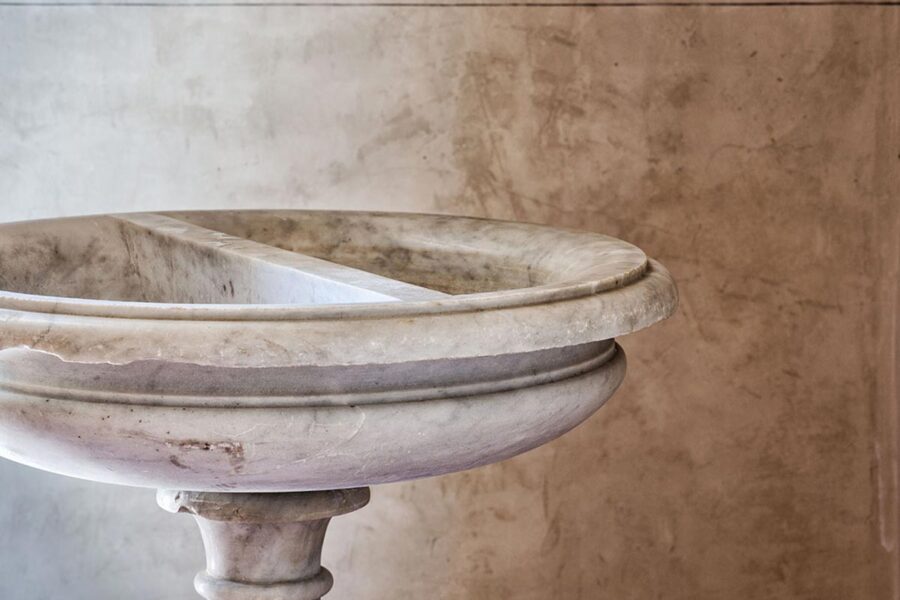 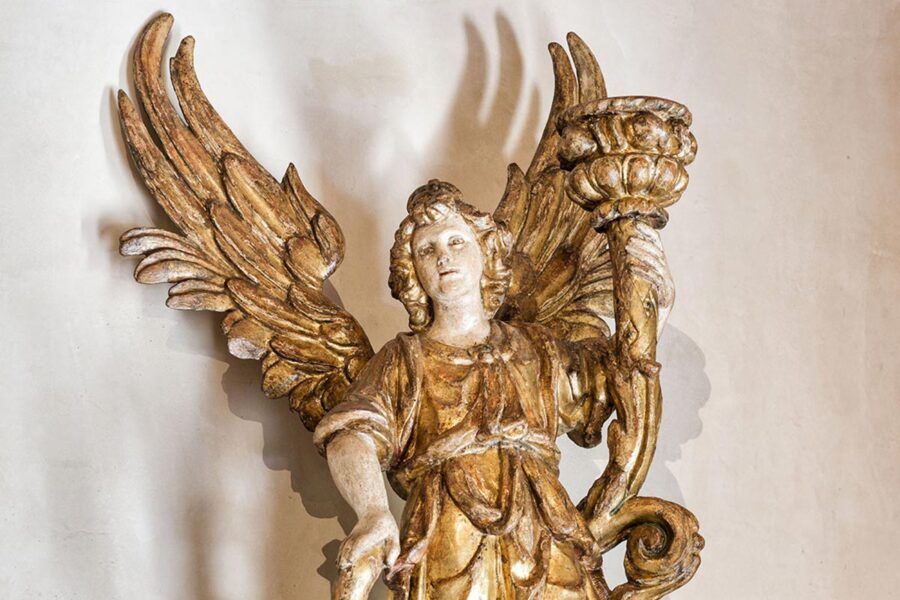 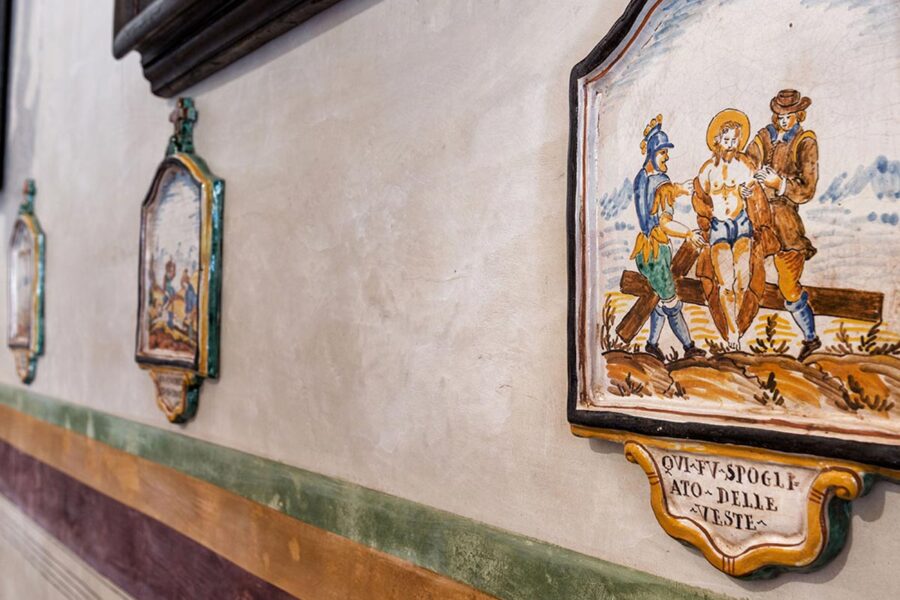 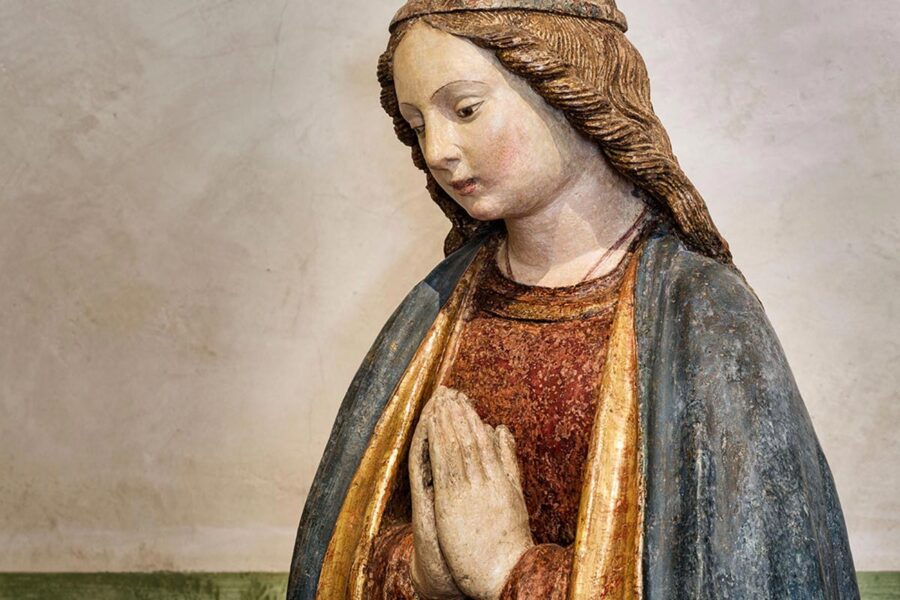 Directions & map
Send Request
There was a validation error. Check the required fields and resubmit the form. Your message has been sent successfully. Thank you!